In this image taken from police video played during the trial of Kim Potter, a former Brooklyn Center police officer, on December 8 in Minneapolis, Potter lies on the ground after the traffic stop of Daunte Wright on the April 11.

Body-camera footage played in court during the first day of the Kimberly Potter trial showed the former Brooklyn Center officer collapsing on the ground after fatally shooting 20-year-old Daunte Wright in April.

Opening statements took place on Wednesday in the Hennepin County Government Center in Minneapolis, where Potter, a white woman, is charged with first-

and second-degree manslaughter for the shooting of Wright, a Black man, during a traffic stop earlier this year.

Officers initially pulled Wright over for an expired registration tag on his car, but they attempted to detain him after discovering an outstanding warrant for a gross misdemeanor weapons charge, authorities said.

Potter has pleaded not guilty to both charges, arguing that she accidentally deployed her gun instead of her Taser, which was holstered on the other side of her body. Her defense argued on Wednesday that Potter attempted to stun Wright because he was “trying to kill her partner,” Sgt. Mychal Johnson.

But Anthony Luckey, the Brooklyn Center officer whom Potter was training at the time of the shooting and who was at the scene, contradicted the defense’s approach. He testified that Wright gave police no reason to believe he had a gun and didn’t threaten responding officers. 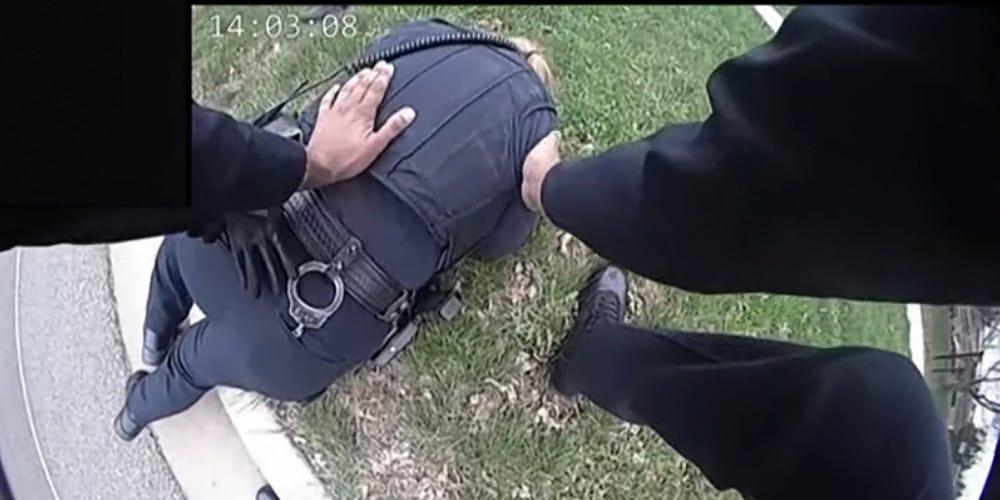 While questioning Luckey on Wednesday, the prosecution played never-before-seen body-camera footage from the moments immediately following the shooting.

“Oh, shit. I shot him,” Potter could be heard saying in footage from her camera. “I grabbed the wrong fucking gun.”

A separate video taken from Luckey’s body-camera showed Potter falling to the ground.

The officer kept her face buried in the curbside grass for minutes following the shooting, the video showed.

“Kim, that guy was trying to take off with me in the car!” Johnson could be heard saying in the video.

The footage showed both Luckey and Johnson reaching down to Potter as she lay on the curb.

Following Luckey’s testimony, the court wrapped for the day. The case, in which Potter is expected to testify, is scheduled to resume on Thursday morning.